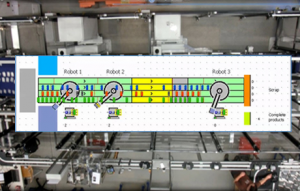 Modine in Uden is using a machine from Z-tech for the production of oil coolers and water-cooled air coolers for cars. The required number of robots in their new machine is determined according to a simulation model made by Ergo-Design. That gave insight on effective deployment of the robots.

The coolers exist, depending on the type, of twenty to forty aluminium plates and turbolators, which are stacked in a mould in the right order by three robots. These aluminium plates are picked by robots from the four adjacent conveyors. “We are dealing with high volumes. It was a challenge to achieve high speed and accuracy of the robots”, says Tanno Zuideman, director of Z-tech. “For the first two robots, it is easy to pick the products but the third robot has to deal with a puzzle of aluminium plates left over by the others.” A simulation model made by Ergo-Design gave led to the conclusion that a reduction of the speed of the conveyors before the third robot would solve the problem. An accumulator could reduce the gaps between the products. The aluminium plates remain longer in the picking range of the third picking robot so it can always get a hold of the needed product. The third picking robot is therefore 99% of the time effective. “This result was never achieved without simulation and more robots would have been needed, each with a much lower occupancy rate. Presumably, we would end up with less than half of this result”, says production engineer Pieter-Jan Broeksteeg of Modine. The loss of capacity and material is limited as a result of simulation. We are very excited about this method. Simulation quickly led to an innovative concept which gave us the machine we intended. Simulation must be a standard tool in the design phase of complex machines.”