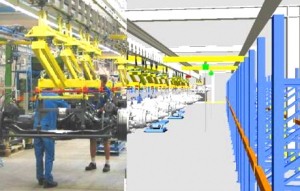 In the context of the Production Master Plan has Scania Zwolle increased their daily production capacity of their assembly factory from 95 to 150 trucks. This was a tremendous challenge because two new assembly lines were realised while continuing normal production. Ergo-Design employees have supported Scania with preparation and implementation for several years. Systematic Layout Planning resulted in a founded Block-Layout for the entire production. Ergo-Design has designed and or implemented in consecutive order: Axle assembly line, Wheel supply line, Frame assembly line and several sub assembly stations.

The accompanying picture shows the result of the axle line, which is the supply line for the two main assembly lines for trucks. Ergo-Design was responsible for the development, concept engineering and project management up to the realisation. The axles come from Scania Sweden and are equipped with the proper suspension and brakes on the assembly line, in accordance with the demands of customer and in truck delivery order. The right expertise, backed by with our 3D software, resulted in a good line design including layout, tooling and logistics specifications. Efficiency and ergonomics are obviously fully included. Good preparation contributed to the entire line being built and taken into operation within 3 weeks.