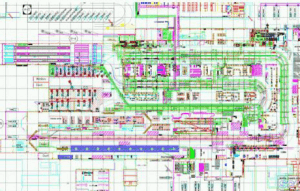 In the context of the Production Master Plan has Scania Zwolle increased their daily production capacity of their assembly factory from 95 to 150 trucks. This was a tremendous challenge because two new assembly lines were realised while continuing normal production. Ergo-Design employees have supported Scania with preparation and implementation for several years.

The accompanying picture shows the result of the production Layout of the new factory design. The new Castor and Pollux truck assembly lines makes it possible to produce various types and in different Takt times. Systematic Layout Planning was used to design the factory layout. This resulted in a new Block Layout for the entire production including a migration plan. Ergo-Design has designed and or implemented in consecutive order: Axle assembly line, Wheel supply line, Frame assembly line and several sub assembly stations.