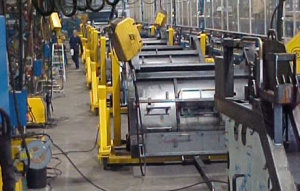 In 2004, the Geesink Norba group in Emmeloord (NL) redesigned its production process. Two production lines for the main components of the Garbage trucks, ‘Bodies’ and ‘Tailgates’, have to be realised. Ergo-Design was asked to design and realise the new ‘Tailgate’ manufacturing process.

With a project scope ranging from analysis, concept and detailed layout design untill realisation and start, the goal was a takted Flow line based on the LEAN manufacturing vision. We used “Value Stream Mapping” (VSM) to achieve an optimal concept, together with the Geesink Norba-workers. We digitally visualised the results of the VSM in 3D in Delmia Process Engineer software. This gave everyone involved a good impression and valuable feedback for further improvements. After careful preparation, the realisation was completed in 3 weeks during the summer vacation.