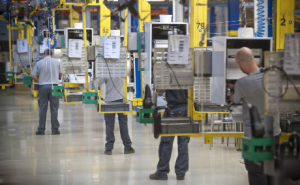 In 2009, Bosch Nefit merged their production activities of Buinen in their main premises in Deventer. Here, boilers are made in accordance with the Lean principles following the Bosch production system. Within Bosch Thermotechnik, production in NL was seen as a benchmark. Ergo-Design contributed to the establishment of production and logistics processes in both locations.

The production and logistics concept of Bosch Nefit has evolved in dozens of internal workshops with the aim to assemble boilers with minimal waste. Ergo-Design provided structural support to the Lean manufacturing workshops with translating concrete ideas into actionable plans. These plans were visualised in 3D, simulated and presented to all stakeholders, staff and suppliers, to timely inform them about the methods of the new factory. In addition, a Simulation Based Scheduling application was developed, with which the daily optimal sequence of to be produced boilers is determined.